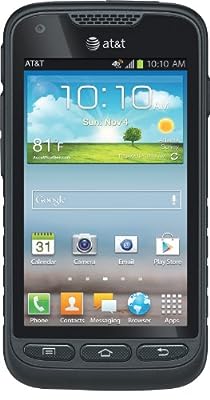 View eBay Options
Product Information (more info)
CERTAIN CONTENT THAT APPEARS ON THIS SITE COMES FROM AMAZON SERVICES LLC. THIS CONTENT IS PROVIDED 'AS IS' AND IS SUBJECT TO CHANGE OR REMOVAL AT ANY TIME.


The Samsung Galaxy Rugby Pro is a rugged Android (ICS) smartphone built for the needs of customers with active lifestyles or harsh business environments.

For Work or Play

Day-to-day or on the job, the Galaxy Rugby Pro fulfills all your smartphone needs with the physical strength to handle whatever life throws at it. It’s designed to handle the elements, and is waterproof* (submergible up to 1 meter for 30 minutes), dustproof, shock-resistant, and built to mil-spec 810g standards.

What's in the Box

*Meets US Mil-STD 810g for Dust, Humidity, Rain, and Shock. Waterproof against incidental exposure to water when all ports are tightly closed. Not designed or intended for in water use. Submersible up to 1 meter for up to 30 minutes. Waterproof based on IP67 rating.

By the end of 2011, AT&T plans to launch its 4G LTE network in 15 major metropolitan areas, covering at least 70 million Americans. Coverage will continue to expand in the next few years and is planned to be largely complete by the end of 2013.

And when combined with 4G HSPA+ technology, AT&T is capable of delivering a quicker, more consistent mobile broadband experience than ever before. AT&T has deployed HSPA+ to virtually 100 percent of its mobile broadband network, which enables 4G speeds when combined with enhanced backhaul (via Ethernet or fiber). Backhaul is one of the major pieces of a telecommunications network. Think of it as the limbs connecting AT&T's cell towers with AT&T's backbone network that provides access to the Internet.

The new Ice Cream Sandwich interface features an onscreen navigation bar that replaces the hardware buttons for Back, Home, and Menu found with older Android-powered phones. And with Google+ integration, you can video chat with groups of up to 9 friends as well as easily upload and share photos and videos. Other features include:


You can now unlock your phone with just your face using the Face Unlock option. It takes advantage of the front-facing camera and state-of-the-art facial recognition technology to register a face during setup and then to recognize it again when unlocking the device. Just hold your phone in front of your face to unlock (or use a backup PIN).

And the lock screen now lets you do more without unlocking. From the slide lock screen, you can jump directly to the camera for a picture or pull down the notifications window to check for messages. When listening to music, you can even manage music tracks and see album art.


Quickly access related apps right from the home screen by organizing apps and shortcuts into folders--just drag one app onto another to create a folder.


Multitasking is even easier and more visual in Android 4.0. The Recent Apps button lets you jump instantly from one task to another using the list in the System Bar. The list pops up to show thumbnail images of apps used recently--tapping a thumbnail switches to the app.


The new voice engine in Android 4.0 lets you dictate the text you want, for as long as you want, using the language you want. You can speak continuously for a prolonged time, even pausing for intervals if needed, and dictate punctuation to create correct sentences. As the voice input engine enters text, it underlines possible dictation errors in gray. After dictating, you can tap the underlined words to quickly replace them from a list of suggestions.

Also Available for This Android Device

AmazonBasics Hard Carrying Case for 5-In...

The Best Products on eBay